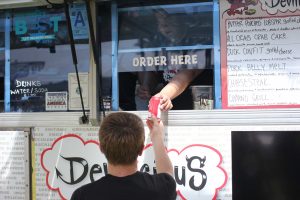 The National High School Journalism Convention (NHSJC) in San Diego is a learning experience that feeds the minds of many scholastic journalists and advisers. While their minds are being nourished, their stomachs are as well. A group of 5 food trucks is catering the convention at Bayfront Park, outside the Hilton Bayfront Hotel where the convention is hosted. The trucks serve from 11 a.m. – 1 p.m. on Friday and Saturday at the convention.

“I think it’s very interesting. I’ve never been to a food truck before, and I really like how convenient and cheap they are. I like that I didn’t have to go too far outside of the convention to get lunch either.” attendee Mike Ebert said.

The food trucks feature foods that are California-oriented, and some that are not. Foods include cupcakes, Mexican cuisine, burgers, American food, and fish tacos. Prices are mostly under $20. The convention organized the food trucks as an alternative to the other food options in the area. Food in San Diego can be costly and time-consuming, and the introduction of the food trucks at the convention hotel provides a low-cost and convenient place to have lunch while in-between sessions or on a break from convention proceedings.

“It’s cool that the food trucks are here,” Kai Gallagher of Palo Alto said. “It’s higher quality than what I expected, and way more food than I thought it would be. It’s nice to get outside and away from the convention too.” The food trucks staged at the park included “Devilicious“, which serves Buffalo chicken sandwiches and more, “Chubby’s“, which featured burgers, “Lil’ Miss Short Cakes”, who serves cupcakes, “Delicioso food truck”, which has Mexican cuisine, and “Tabe“, which dishes out fish tacos and barbecue.

“I started 5 years ago, I was a teacher for 17 years, and I decided to change careers, and here I am, meeting wonderful people,” Delicioso owner Jorge Cortez said. “We’re ready to rumble, it’s affordable pricing and ready to go.” Chubby’s serves burgers, but not just any burgers. These burgers feature Chubby’s sauce, which is a cream cheese based sauce with a spicy undertone, served on ciabatta bread, and accompanied by crinkle-cut fries.

“I am a very picky eater, and I picked chubby’s because it was the most basic and american and I’m really not into like wraps or mexican, and it was easy just to get a burger there.” attendee Maddie Hiatt said. Delicioso has mexican cuisine at a budget-friendly price, which served inventive foods like a burrito stuffed with french fries.

Click Here for a look at Twitter and Instagram from Friday’s food truck venue at NHSJC. FHNtoday also contacted San Diego Food Trucks, which lists food truck locations and events in San Diego, and the group posted the venue to their Facebook page.