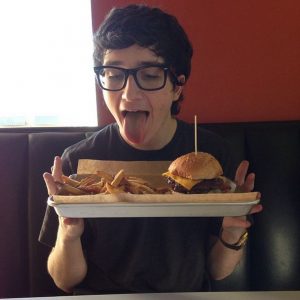 Daniel James Alexander, or SNCKPCK as he’s better known online, is actually quite a character. The 20-year-old college student attends school in Richardson Texas for Emerging Media and Communications. Doing what he loves, SNCKPCK talks about his goals for the future.

“Not exactly sure. I would love to do what I’m doing now for a steady job. Just taking things slow right now,” SNCKPCK said.

SNCKPCK is an Artist, Director, Musician, Author, and Motivational Speaker.

So What Exactly Does SNCKPCK do?

SNCKPCK has successfully used today’s technology and equipment to broadcast himself in a positive and influential was to kids and teens across the globe. Using every social media platfrom out there from Twitter and Vine, to Tumblr and YouTube, SNCKPCK makes short videos, gifs, and even pictures of every day life with an extra touch of positivity.

His media is backed by tens-of-thousands of people worldwide who follow SNCKPCK. Having over 73,000 followers on Twitter alone, this kid’s social influence is something to brag about. He even does live video chats online hosted by a website called Spreecast that anyone can join and watch. We asked him how the average weekend was spent as an internet celebrity.

“Probably doing a Spreecast or making something. I don’t usually go out on the town a lot. I prefer staying home and creating things,” SNCKPCK said.

So All He Does is Make Videos and Tweets?

Well not exactly, SNCKPCK has published tons and tons of things. You can check out the official YouTube Channel of SNCKPCK here where you can find all of the videos Daniel makes and publishes. His Vine account linked here shows all of his short happy yet quirky clips of anything from positive messages to his cat Peaches.

But it’s not just videos. You can find all of the exclusive full-length music albums composed by SNCKPCK himself on his Bandcamp; but he is also on Spotify. But he doesn’t stop at just music or videos, SNCKPCK has even published hardback books. For a complete archive as well as purchasing information you can check out SNCKPCK.com

Here is a short YouTube video about SNCKPCK and his recent Milestone. The SNCKPCK Documentary

SNCKPCK was willing to take some precious time out of his busy schedule to talk to FHNtoday about some of the things he does and where he get is inspiration.